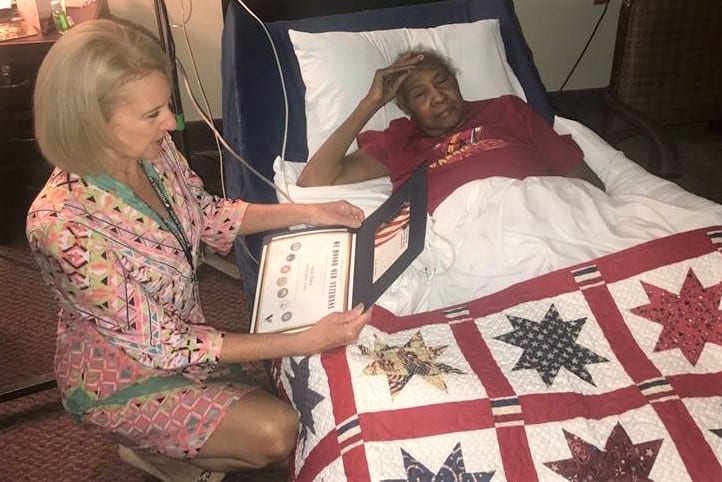 Hosparus Health volunteer Renee Finnegan made a career serving others fearlessly and compassionately. Today, she continues to take care of others, particularly her fellow veterans.

Renee, a retired Colonel, served honorably in the U.S. Army for 28 years. She served as a brigade commander and was deployed to Operation Desert Shield/Desert Storm with the Third Army. After she retired, Renee continued to serve as the military liaison for the University of Louisville, a program to develop soldiers and veterans, strengthening the network for the U.S. Army Human Resources Command Contact Center at Fort Knox.

Serving is in Renee’s blood. Her father is a World War II veteran, and her mother was director of the USO in Trenton, N.J. One of her sisters served in the Army and another in the Navy, making for some fun rivalry between the Knights and Midshipmen.

In addition to the veterans’ recognition or nursing home companionship visits she makes as a volunteer for Hosparus Health, Renee serves veterans at the VA in their No One Dies Alone program, and teaches yoga at VA clinics. She serves with Little Sisters of the Poor and Coalition for the Homeless Operation Stand Down, washing and massaging the feet of the homeless.

The No One Dies Alone program at the VA is small, which led her to wonder who else in Louisville was caring for dying veterans. Through Hosparus Health’s website, she learned about our volunteer program and our participation as a Level 4 Partner in the national We Honor Veterans program.

Renee also had connections with two of our staff members, Chief External Affairs Officer Gwen Cooper and Volunteer Manager Susan Norsworthy, through working with them at VCAL – Veterans Community Alliance of Louisville. After talking with Gwen about opportunities with veterans, Renee completed training in April 2018, and has been making visits to veterans, nursing home patients and sitting 11th hour vigils.

Giving Vets the Recognition They Deserve

Renee’s passion and compassion for serving veterans is clear. She believes any veteran, regardless of how long they served deserves a final thank you. The veteran recognition is also important to the family and caregivers. Whenever possible, most members of a veteran’s family will attend the recognition ceremony.

The experiences that veterans share makes it critical that it is a veteran who is sitting with a dying veteran, or providing the recognition visit. She said it means so much to a veteran to have a companion who understands military service. Renee is committed to caring for veterans and believes anyone who served really needs to have that last thank you. She said it “feels right” and she’s giving back part of what the military gave her, including traveling the world and two Masters degrees. The veterans she visits don’t know her rank, only that she served.

Peace and Dignity at the End of Life

Renee gets inspiration for visits by thinking about what she would want for herself at the end of life. She would definitely want to hear music, and plays “spa music” from her phone on nursing home visits. She also hopes to help people go out on “a good note,” and if she knows that patient shares her faith, will say the Rosary. Just in case someone may need it, she always carries around an extra set of Rosary beads made by the Little Sisters of the Poor.

More than anything, she believes that the time she spends with someone at the end of life should be a peaceful time. She draws from her experience and compassion for others as a companion to veterans and non-veterans alike.

When I first sat down to interview Renee for this story, she told me about a book she’s reading called “A Fearless Heart: How the Courage to Be Compassionate Can Transform Our Lives.” That title could be used to describe her. Renee serves because she truly loves to help others. Her career and life of service are remarkable. The presence and compassion she freely gives to others is transformative.

That’s why we were thrilled to surprise her with her very own veteran recognition event last week. Unable to attend our recent veteran volunteers gathering earlier this month, Renee was ecstatic when we presented her with her own quilt.

If you would like to serve veterans or help other patients at Hosparus Health, sign up to volunteer in any of our Kentucky or Indiana communities.