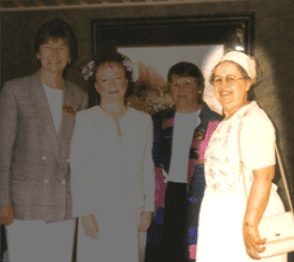 I was born in Rock Island, Illinois, and raised in Western Illinois on a farm. When I was 11, I had polio and from then on, I wanted to be a nurse. During nursing school in Chicago, I met George, and we married a few months after I graduated. We moved to Dayton, Ohio after George graduated. When he was drafted, we spent two years in Wichita, Kansas at McConnell Air Force Base. By then we had two children, Jeffrey and Diane.

After several other moves, we eventually settled in Louisville in January 1977, where George took a position as head of the anesthesia department at the medical school. I worked as a nurse before the children were born, but when they started school I was ready for something else. I received my certification in Medical Record Administration while we lived in Texas and had various duties such as coding, consulting and teaching there and here in Kentucky.

Experience with Loss and Introduction to Hospice Care

Grief and loss were ever present in my experience. My oldest brother died at age five of an infection the year before I was born. My next older brother died at sixteen of polio in 1950. George’s father died suddenly in 1964, and his sister dealt with breast cancer from 1970 until her death at 44 in 1978.

I first heard about care for the dying when we lived in Texas, between 1972 and 1976. After we moved to Louisville, I learned of Dame Cicely Saunders’ work and became acquainted with Sr. Marilyn Spink, who had spent time at St. Christopher’s Hospice near London. Sr. Marilyn organized the first volunteer training program in the spring of 1978.

The idea of hospice care appealed to me because in my nursing experience, end-of-life care was not spoken of, nor was there any preparation in our training. It appeared that dying patients became more isolated as death approached, and I felt there had to be a better way to deal with the final stage of life.

While the first volunteer training was underway in the spring of 1978, one of the hospice board members, the late Dr. Ellis Fuller, arranged for Medical Towers North downtown to provide a small office free of charge to hospice for a year. The first patient “teams” consisted of a volunteer nurse and a lay volunteer. They visited patients and families, assessed needs and did all they could to meet those needs. Other volunteers answered the phones (no voice mail available if no one was in the office) and did office work.

In late 1978, Lowell Katz, a young doctor starting his practice in Louisville, joined the other volunteers as the first medical director. The phrase used for what this fledgling organization was doing: “Putting the airplane together in flight.” The Inception of Hospice of Louisville

Hospice continued as an all-volunteer organization until 1979 when Eleanor Dougherty was hired as the first full-time executive director. She and the board raised funds and applied for grants to fund more staff and a larger office in Medical Towers, followed by one in the newly renovated Old Medical School Building.

The Medicare hospice benefit was implemented in 1983. It included a requirement for volunteer involvement and for care being available to all, regardless of ability to pay.

The Growth of Hospice of Louisville

The Hospice of Louisville board of directors formed about 1976 and guided the organization from the original board member Sherrill Thirlwell’s dream through the years of development and growth to become one of the largest nonprofit hospices in the country.

The organization’s incredible growth was due to many factors, including the vision of many board members, volunteers, and paid staff. Hospice of Louisville started as a home-based program and gradually expanded to nursing homes in the 1980s. Sherrill Thirlwell had the dream of a hospice facility at the old Waverly Hills TB Hospital. When the inpatient unit opened in 1995 at the old Methodist Evangelical Hospital (now Norton Healthcare Pavilion), it was a long-awaited milestone.

The pediatric hospice program, started in 1980, was the first one in the country. It has evolved to become Kourageous Kids, with several events for patients and families during the year. It was also in 1980 that Hospice of Central Kentucky started.

The Bereavement Team began in 1981 and grew into the Grief Counseling Center (GCC) to provide individual counseling, support groups and programs for all ages. Camp Evergreen started in the early 90s, just for the kids who had experienced a loss. Now this is an annual weekend retreat for the entire family, coordinated and staffed by GCC and volunteers.

Sustained growth increased after the Medicare benefit was implemented in 1983. It provided a stable source of income for expanding the teams to include social workers and chaplains as well as the mandate for including multiple disciplines on each team.

In the 1990s, Hospice of Louisville merged with hospice organizations in Southern Indiana and Central Kentucky to become the Alliance of Community Hospices & Palliative Care Services. In 2008, the organization was given the name Hosparus and started seeing patients in the Barren River region.

Through the years, I have done all kinds of things as a volunteer. I would call myself the volunteer coordinator for a while; medical record consultant for many years; home/nursing home patient volunteer in Jefferson and Bullitt counties; helping with annual memorial services; office volunteer (lots of mailings in addition to whatever the “usual” assignment was); volunteer liaison to a nursing home team; veteran’s quilt maker; pillow maker for the inpatient unit; and many years ago, I did some health fairs and speaking engagements. Most recently, I did bereavement cards for the Northeast Louisville office. My last day as an office volunteer was in October 2018.

The Good, the Bad, the Hope

The best thing about being involved with Hosparus Health for the past 40 years is the wonderful people who were involved from the very beginning and the remarkable people who joined the organization throughout the years, bringing the founders’ dreams to life.

What kept me going, or my motivation to serve, did not change much through the years. I always knew that the needs were out there, and many people would be required to fill those needs. It was gratifying to realize that so many other people were devoted to the hospice concept. The common thread that kept all of us going was trying to meet the needs of the patients and families.

Hosparus Health has been growing and adapting as the health care field continues to evolve, with increasing emphasis on palliative care. Providing services to those with chronic illness prior to the final stage of life offers increased comfort and quality of life for many more who need it.

My advice for new volunteers is to treasure the privilege of being welcomed into the lives of the patients and families at the end of their journey. For those volunteers with non-patient care assignments, know that every hour of office work, or health fair duty, or envelope stuffing, is vital to the overall mission. For me, retirement includes keeping in touch with friends and relatives, reading books for two book clubs, making patriotic quilts for hospice veterans, knitting hats for a church Christmas project, and eating out with my husband as often as possible.

Dr. George Webb is an integral part of Hosparus Health’s history, along with his wife, Pat Webb. He spent many years as a practicing anesthesiologist, and then as one of our first hospice physicians. When he started working with Dr. Joe Rotella on our inpatient unit in 1999, it was an informal fellowship in hospice and palliative care because such a specialty was not yet recognized in standard medicine.

Dr. Webb wrote two books that have been invaluable to hospice care, “Cultural Diversity in America: How Different Cultures Approach End of Life” and “The Disease Progression Sheets.” Throughout his many years of working and volunteering with Hosparus Health, he has visited patients and given countless talks to staff, volunteers, medical students and the community. He organized Hosparus Health’s admission packet process and spent many hours doing chart reviews to help with Medicaid audits several years ago. The list goes on, but when people ask him what he does now, he always answers first, “I volunteer with hospice.”

Dr. Webb truly is a renaissance man. In his free time, he has been a ballroom dancer, orchid grower, painter, sculptor and musician. He and Pat have two children and three grandchildren.