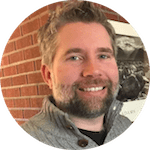 If you know Justin Magnuson, you may know him as the founder of the Before I Die Festival Louisville, or for his career at Louisville Trager Family Institute for Optimal Aging(formerly The University of Louisville’s Institute for Sustainable Health and Optimal Aging). At Hosparus Health, we know him as a faithful volunteer. It’s easy to recognize his passion for the end of life. But what you may not know about Justin is just how involved in this activism he is, or how he became involved.

Like many of us, Justin’s only experience with death growing up was through the passing of a few family members who had “typical deaths,” from accidents or medical emergencies. But when his grandmother became sick at age 80 and he was just 25, Justin experienced a different type of death, with him in a different role. He became his grandmother’s healthcare surrogate, which is the adult appointed to make healthcare decisions for you when you become unable to make them for yourself.

“I knew when she was hospitalized something was very wrong. We ate lunch the day she drove herself there. She literally went from living independently and lucid to being delirious,” he says. “She had told me I was her healthcare surrogate, where the checkbook was, and that she was DNR.” That was the only information he was armed with when he received the news and proceeded to navigate her care up until her death five weeks later.

In addition to his personal experience, Justin realized something needed to change for the better through community education. “The first light bulb went off in a health communication class at UofL, where I learned how we talk about health issues can have a dramatic effect on patients and their caregivers. Several years later, after I started volunteering for Hosparus Health, I was in a workshop and mentioned at lunch that people treated me like I was special when they found out I was a hospice volunteer, everyone laughed. About a month later I heard an interview with Lizzie Miles. She first brought Death Café to America on NPR, and that brought our cultural death phobia into focus for me.”

Justin’s journey in advocating for end-of-life decision-making brought him to Hosparus Health initially as a massage therapy volunteer in 2011. A friend of his worked in our Grief Counseling Center, and after talking to each other about our other services and hospice care, he was inspired to volunteer.

That was just the catalyst for his contribution.

His passion eventually led to the creation of National Healthcare Decisions Day (NHDD) Louisville. The first NHDD event was in 2016, where he and Hosparus Health’s Ellen Green spent months planning for an event that only brought in a few people. He didn’t let that slow him down, though. “I knew the topic was important, but that hosting an event to simply signing advance directives wasn’t going to motivate people to come out.”

Then came the birth of Before I Die Festival.

“Around the time of NHDD, I met two people passionate about changing our culture’s death phobia, Kel McBride and Deb Tuggle. In May, we discussed the idea of hosting some events, and the first Before I Die Fest happened in October.” The first festival included 20 events (art, music, poetry, movies, talks, etc.) and reached over 700 community members.

NHDD Louisville now includes a partnership of local organizations that collaborate to host various events, educational opportunities, and conversations throughout the month of April every year. The events reach hundreds of community members, with the hope that people will take action to make their healthcare decisions known, and plan for that last chapter in life. Hosparus Health is one of the collaborators and is proud to assist the community with healthcare decisions and care at the end of life.

Thanks in large part to Justin, NHDD has come a long way from a few people showing up at the library to complete advance directive forms.

He continues to lead efforts in advocating for end-of-life decisions, while also collaborating with national movements surrounding the subject.

“Unfortunately, humans aren’t good at making decisions to avoid future pain. In fact, it took taxes for people to stop smoking, not the strong evidence of negative health consequences. The author Stephen Jenkinson articulates that how we die, what he calls ‘dying wisely,’ can be a gift to our loved ones. I want to echo those sentiments to people and their family members; that leaning into the discomfort of conversations and decisions early will help the patient, caregivers, and their providers have a much better experience.”