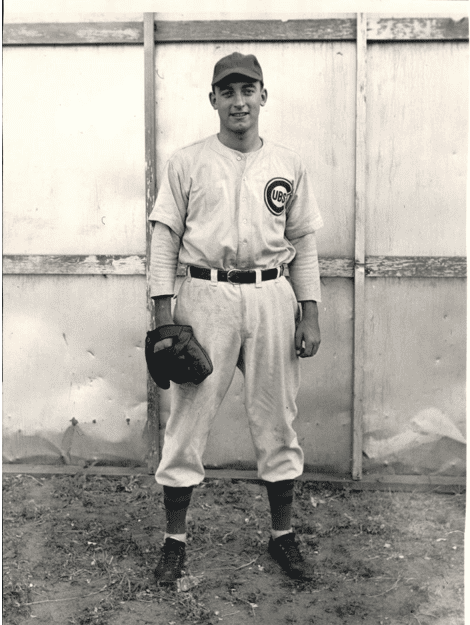 Ted Wendt was quite a guy. He was a decorated World War II veteran. He spent time as a German POW. He earned the Purple Heart. He played for the Chicago Cubs farm team in 1941 and ’42. And while he didn’t get the opportunity to see them win the World Series this year, he would have been delighted with the outcome.

We know all that about Ted because his daughter Annie Wendt, grandson Rafe Borders and his life partner Anne Tracy had the opportunity to spend lots of quality time with Ted at the end of his life thanks to Hosparus.

Anne Tracy is the Event Supervisor at Whitehall, Louisville’s Estate Garden. Anne shared Ted’s story with us at a Hosparus event held at Whitehall earlier this year and again publicly at one of our VIP luncheons. Anne said she, Annie and Rafe were with Ted at the VA Hospital when his doctor suggested he was at a point in his disease that being at home under Hosparus care might be the best option.

“We didn’t know there was an option for care at home. Ted had actually talked about wanting to go home,” Anne said. So the three of them talked about Hosparus with Ted. He was ready.

While all three shared in Ted’s care, Anne and Rafe moved in with Ted the last two weeks of his life. Anne said she was taken aback by all that Hosparus did. “They had a team of people who did everything – from medical care to providing and setting up all the equipment to answering all our questions.” She said every single person was professional, kind, calm and caring. “It may sound kind of sappy, but I actually felt embraced and protected by the organization.”

Anne recalls those last weeks and days as a special time spent in a “sacred place.” She said she, Rafe and Ted shared so much during those days. “Hosparus made it possible for us to be there with him, and for him to be in each moment.”

Anne’s most cherished memory was at the very end of Ted’s life. She and Rafe were there, holding his hands. She and Ted looked into each other’s eyes. “He looked at me in a moment of clarity and said ‘Hi.’ I said, ‘Hi, Ted.’ And then he closed his eyes for the last time.”

“It’s a shame more people don’t get our experience,” Anne said. “The end of life can be hectic, bewildering and full of unknown questions. Hosparus made all that melt away.”

Anne closed her story by saying she, Annie and Rafe were grateful for all Hosparus did for them and Ted to ensure he had a peaceful, loving ending to a life well lived.